I have a problem loading maps in my FN2. I have Hondata FlashPro, everything worked until yesterday and today I did upgrade to version 3.5.4 no and now the message pops up all the time " There was a problem witch the calibration ". I can't put the finished map on the computer, but I can't put it on the hondata. 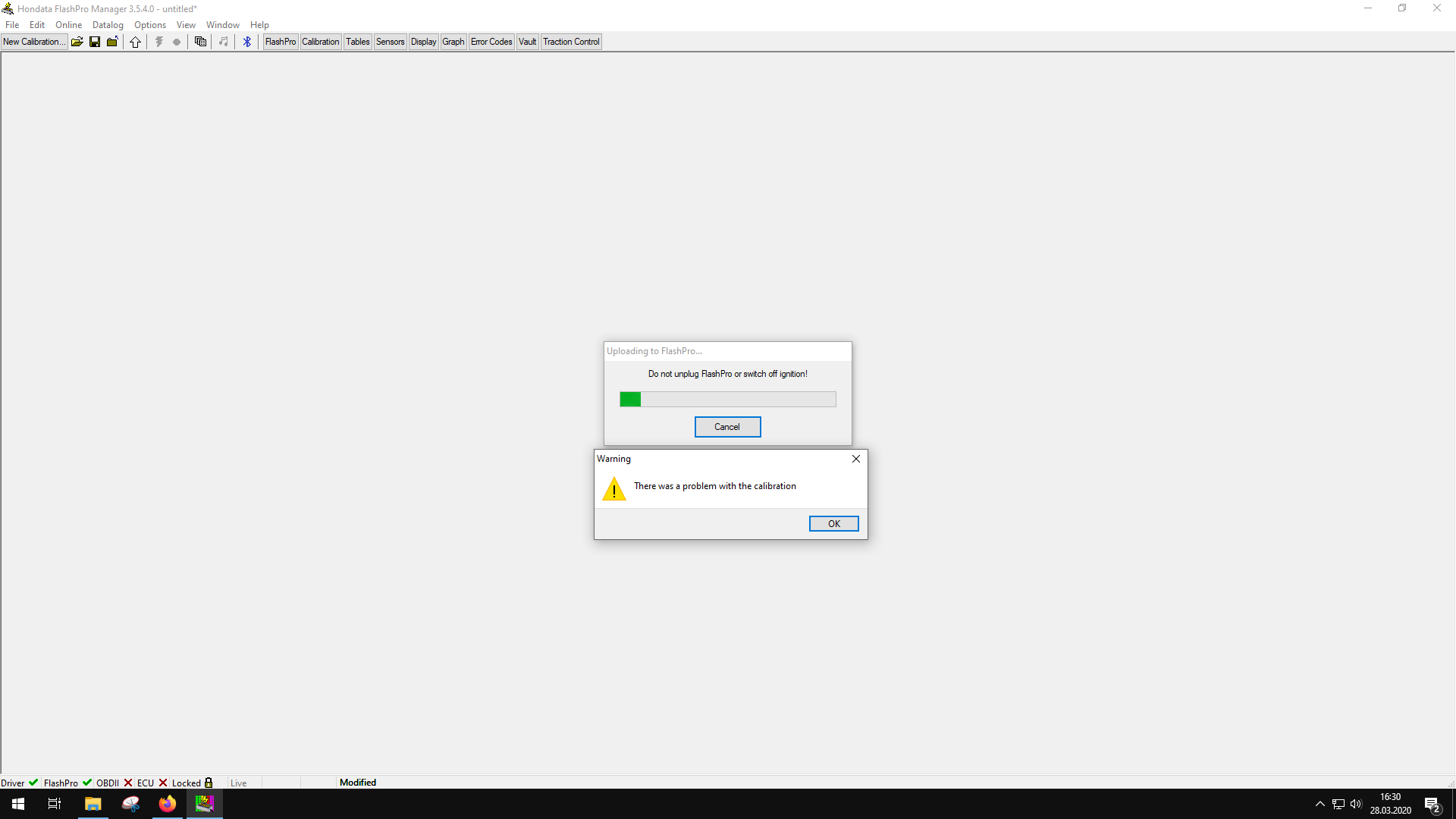 With this version 3.5.4.0 I can't even upload the factory map via FlashProMenager
Top

I have downgraded to 3.4.4.0 and there is no problem with calibration but an error occurred while uploading.

And on the latest version of the program there is a problem with calibration.
Top

I am having this exact issue, new PC, installed latest Flashpro manager 3.5.4.0, for SN: FP-S2K-US-30703, and the Flashpro unit did the firmware upgrade without issue, but no matter what calibration or in which slot, when you hit upload “There was a problem with this calibration” error immediately pops up. Though it does show it’s on the unit afterwards, and checking last upload status says “The let Flashpro upload succeeded” so I am unsure if it’s actually on there, but I don’t want to risk trying to flash the ECU with it. I have all Green checks in the Flashpro table, no other indication of problems. I tried to install 3.4.x.x version of Flashpro manager but it says my unit has been upgraded so I must use the latest version, ie 3.5.4.0.
Top

Please, please do not downgrade the software version.

Download and install V3.5.4 again and it will work for you.
Hondata
Top

I have this problem with the latest version, 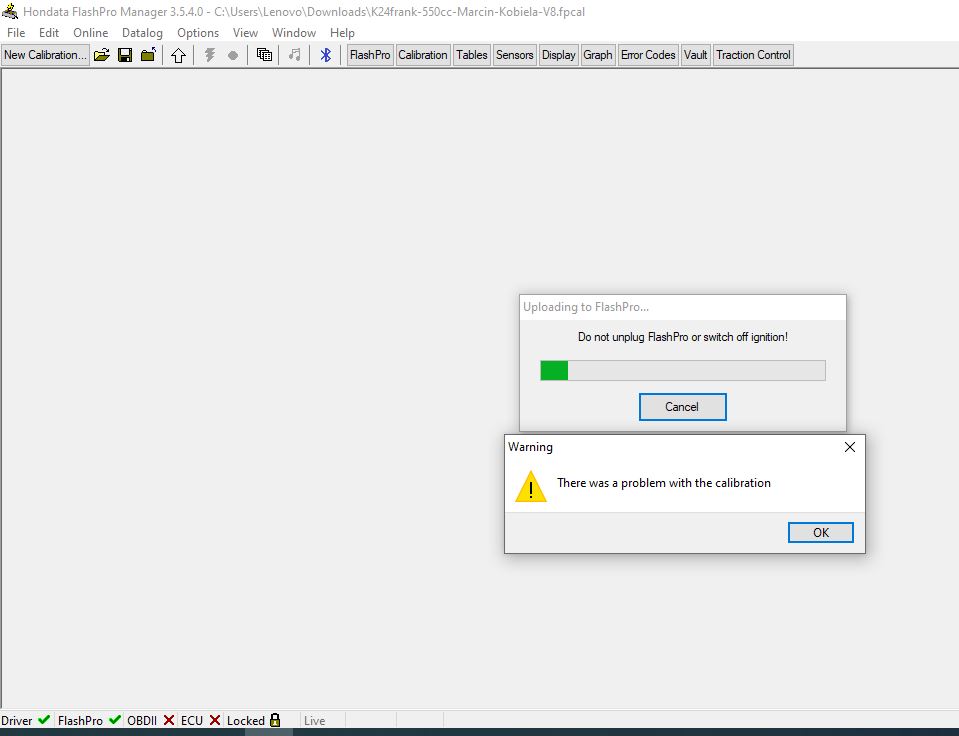 I also noticed that Manager FlashPro incorrectly detects my ECU 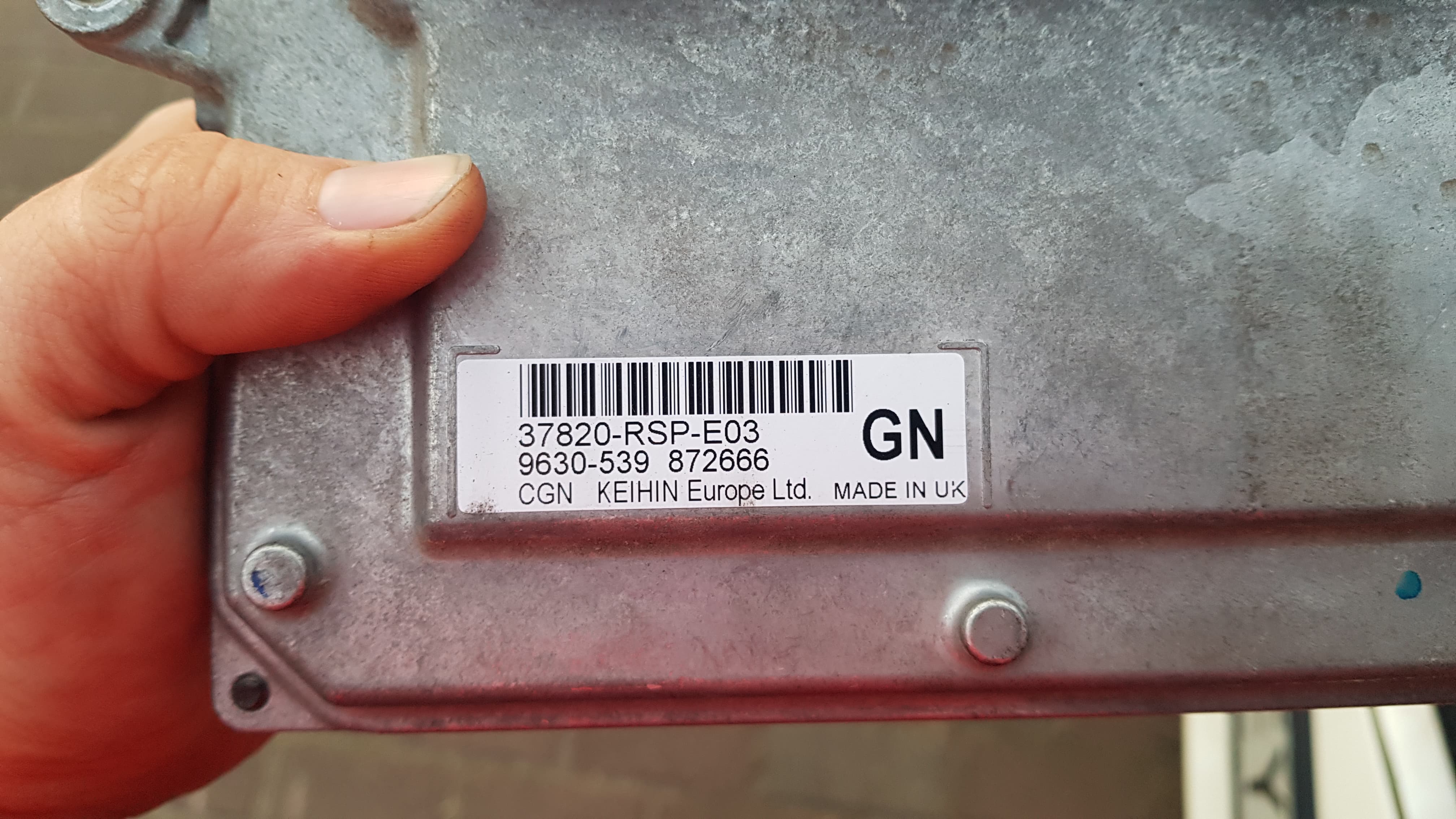 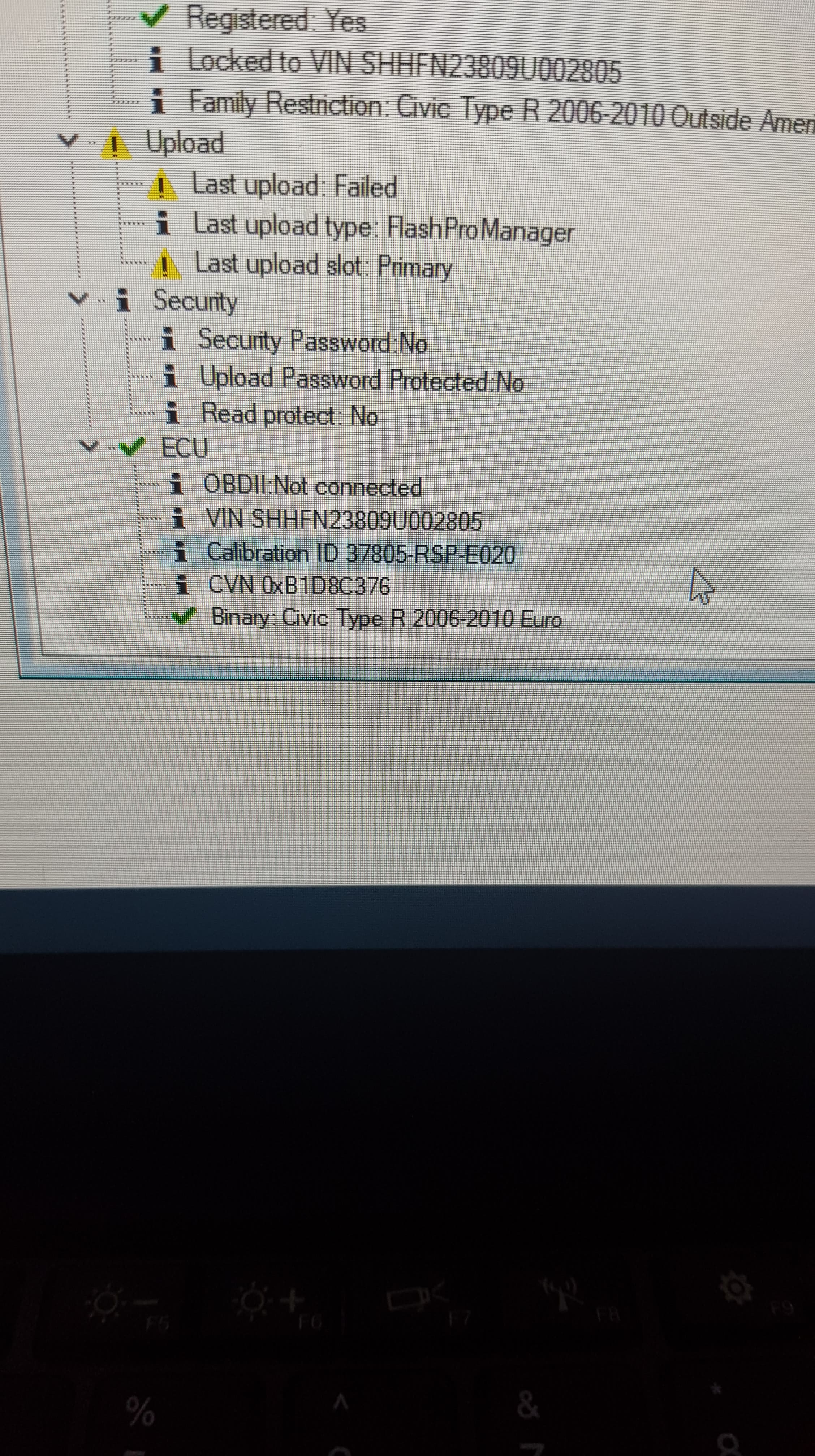 I have uninstalled 3.5.4.0 multiple times and still the situation persists, in my case I’m not connected to my ECU, I have a 2007 S2000 just FYI, but just trying to get two tunes loaded to the Flashpro unit the same way I always have, so that I can load them later.
Top

Netopsengineer wrote: ↑
Sat Mar 28, 2020 4:42 pm
I have uninstalled 3.5.4.0 multiple times and still the situation persists, in my case I’m not connected to my ECU, I have a 2007 S2000 just FYI, but just trying to get two tunes loaded to the Flashpro unit the same way I always have, so that I can load them later.


I already have disconnected from the ECU. I have Fn2 2009. We have exactly the same problem, yesterday I uploaded the older version without any problem.
Top

For the love of god download 3.5.4 again, install it, let it update the FlashPro firmware, and then it will all work.
Hondata
Top


So is the default behavior for the application to tell you that there is a problem with every calibration now? I uninstalled, downloaded again, reinstalled 3.5.4.0 build 1478, it updated my firmware, I'm locked, registered, all green checks, I'm not connected to the ECU, just USB to the laptop, I go to put a calibration in either slot and as soon as you press "upload" it says "There was a problem with your calibration" but all the other indicators about upload status say that its "Ok", so is the default behavior of the app to also allow you to upload calibrations that your previous error checking flagged as a problem? Literally every calibration in your library for the US - S2000 fails with the same message, as I wanted to ensure that the calibration that I have used and not touched since 2017 hadn't somehow gone bad. What information can we provide you so that you can look into it?
Top

For the love of God, LISTEN to the multiple people complaining here. I have to join the train as my flashpro took a dump with this most recent firmware/software combo and won't do anything other than datalog. I cannot upload a different calibration and I cannot set the vehicle back to stock. I lost out time with a tuner today because nothing we tried allowed us to upload or change the calibration in any way. I uninstalled and reinstalled several times, attempted on several different computers, and even tried reinstalling the last version I had downloaded, all to no avail. So please, don't tell us to just "download it again and it will all work." CLEARLY that's not the case.

I have an 07 S2K. My flashpro part number is FP-S2K-US-30437. If it wasn't clear, I'm running the latest software and firmware combo. I'm getting the exact same errors as the OP. A popup window that says there's a problem with the calibration as well as the other one that says the ECU is newer than recognized. I successfully uploaded a canned calibration when I first got this about a month ago. It was meant to be a place holder until I scheduled a real tuner. That time was wasted today and it will likely cost me more to get it done again. After the tuner tried everything he knew and gave up, I spent about another hour of it on my own trying everything I could think of and anything I could find that maybe worked for someone else in a similar situation. The conclusion is that it's most likely down to this update because nothing else worked, and nothing else changed on my car that would affect this. I, and the other people in this thread would sincerely appreciate it if you applied a little more effort than condescendingly repeating yourself about reinstalling the software. Had you bothered to read you would have seen that they've already done it.

Probably not a great first post to make, I know I'm coming in hot. But I'm really frustrated right now and hopping on here and seeing your attitude in this thread really only fanned the flames.
Top

We have repeatedly installed the latest version of the software but it does nothing. I did it on 3 different computers. So please don't tell us we have to do it again because it doesn't solve the problem.
Top
Post Reply
37 posts