I recently had my engine mapped by an authorised Hondata tuner using Flashpro and am experiencing an issue. Under acceleration, when I come off the throttle (to change up a gear) the revs continue to rise slightly. It is almost as if the fuel injectors continue to spray fuel for a split second after I come off the throttle. I'm not saying this is what's actually happening, it's just that is the best way I can describe the symptom. The revs are rising enough to effect the smoothness of gear changes. This will be exacerbated on track as I will be changing gear quicker in that environment (compared to public road use) so will catch the revs even "higher" when engaging the next gear as they will have even less time to drop back to where they should be.

This issue was not present prior to the mapping, although in fairness I have changed some of the hardware (hence the need for a remap). However, I don't believe this issue has anything to do with the changes I made, it seems to stem directly from something in the new map.

Is there a setting within the map that could cause this, or is there something I could check/look for myself using Flashpro?

I have contacted the tuner I used and am waiting a response but there may be some time before I hear back.

I would be very grateful for any help or suggestions as it is spoiling the enjoyment of my car.

Many thanks in advance
Top

Have you tried what is shown in the help file: https://www.hondata.com/help/flashpro/r ... ghtsub=rev
Top

Hi Spunkster, many thanks for such a quick response. No I haven't tried that, I hadn't seen it. I will try and give it a go over the weekend.

I assume I need to first connect my flashpro to a laptop and the vehicle ECU and download the map like this:

Apologies if that's a real stupid question but so far I have only explored the data logging side of Flashpro and am on a very steep learning curve!

Is it true that some engine tuners "lock" the map they have created so that no one else is able to make any alterations? Also, I am paranoid that I will somehow loose/destroy the map whilst trying to get it off my ECU, or through altering it and re uploading to the ECU. Is there anything specific I need to be aware of? I know that's a bit vague and I apologise in advance, it's just I'm not someone to go charging in to stuff I'd normally leave to experts!!

It would be best to contact your tuner and see if they can email you the file before you start just to you have a back up of the calibration you have paid for.

You should be able to download it from the FlashPro, but the tuner may have erased it or protected it.
Top

Thank you, I will send the tuner another email and see if they are willing to email me a copy.


Spunkster wrote: ↑Thu Apr 18, 2019 10:14 am You should be able to download it from the FlashPro, but the tuner may have erased it or protected it.

Just to make sure I understand correctly, does the above mean that the map should be stored locally on my actual Flashpro unit (unless the tuner has erased it) and not just stored within the ECU on the vehicle?

If I try and download from the Flashpro (assuming I've understood correctly) I get the following error: 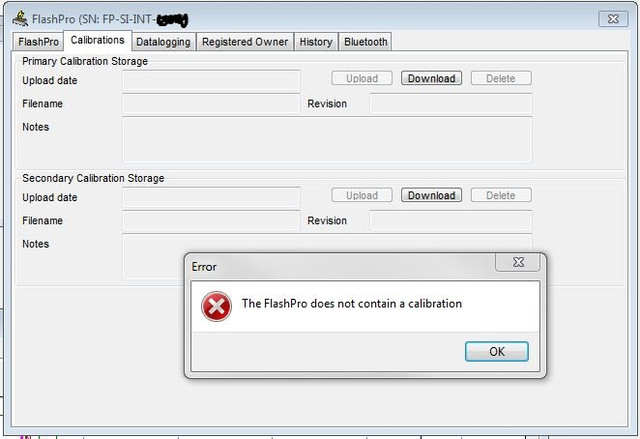 Just to add, if the tuner HAS locked/protected the map to prevent editing and it's only location is on the ECU, what is the normal process then? Would I have to rely on the tuner being willing to look at the map for me to check for any issues such as the "rev hang" issue you illustrated earlier? If the tuner maintains that the map is "good", would that mean I would have to go somewhere else and pay for another dyno mapping?

Your tuner has deleted it. You will need to get the calibration from the tuner. There is no other way to get the file at this point. It cannot be downloaded form the ECU.
Top

Spunkster wrote: ↑Thu Apr 18, 2019 10:33 am Your tuner has deleted it. You will need to get the calibration from the tuner. There is no other way to get the file at this point. It cannot be downloaded form the ECU.

I mistakenly assumed that the map/calibration would be accessible from the ECU (although I'm guessing it must be stored on the ECU somewhere, just not "accessible", otherwise the ECU wouldn't have a map/calibration to work from), but I now realise it's not downloadable. I will see what my tuner says, hopefully they will help/provide me with a copy of the calibration. If for any reason they don't, does that mean I'm completely out of options and will have to go elsewhere and pay for a new calibration? Obviously if that's the case I will check to make sure that they will share a copy of any future calibration before handing over my money.

Again, thanks for your help.
Top

Who is the tuner?
Top

I took my car to CPL Racing in the UK.

Thank you for your continued help!
Top

Well I've sent a few emails to Guy at CPL regarding this issue and requesting a copy of the calibration file but it's quite clear they aren't interested in helping me in any way which is a real shame considering the money I've spent with them.

I think the emails speak for themselves:

So, CPL have seemingly deleted the calibration file I paid for from my FlashPro (which I also bought from them) and are refusing to provide me with a copy of it. As you can see from the emails, they do not appear at all concerned with the "rev hang" issue that has manifested after the engine mapping, so I am now completely stuck. If CPL aren't interested in helping but provided me with the calibration file I paid for then at least I could get another tuner to take a look and check for any anomalies.

I would appreciate if Spunkster or any of the other Hondata representatives on here can offer any further advice or help. If a Hondata tuner won't help rectify a customers issue and has deleted the calibration file, is there any other way to it off the ECU? I'd like to think that the majority of Hondata tuners are helpful and provide good customer service, and that I have just been unlucky with my experience at this individual tuner.

It probably should not have been tuned on a race calibration and should have instead been tuned with a AFM based calibration. He could then change the settings to tune it via MAP if he wants and have all the features necessary.
Top

Spunkster wrote: ↑Thu Apr 25, 2019 12:10 pm It probably should not have been tuned on a race calibration and should have instead been tuned with a AFM based calibration. He could then change the settings to tune it via MAP if he wants and have all the features necessary.

That's worrying. Under what circumstances should "race calibration" be used? I don't get why my car would have been tuned using that method if it effectively reduces/limits the amount of features available in FlashPro and hence restricts the parameters over which you have control?

Some more correspondence via email:

I note that Guy/CPL have not responded to my question of why exactly they will not provide me with the calibration file I have paid for specifically for my individual car. Speaking to other K20 owners, none of them have been refused access to their Hondata calibration files after having their vehicles tuned (they didn't use CPL Racing).

What would the provision of my ECU serial number enable? Incidentally, I would have thought tuners would make a note of the ECU's individual number before tuning in case of any future issues, that way they can be sure it's the exact same ECU that they worked on.

Regarding the "race calibration", just to add in case it is of any significance, as well as fitting the Hondata 4 bar MAP sensor (purchased from CPL) I also fitted a dedicated IAT sensor (as per my posts in this thread viewtopic.php?f=28&t=19462&start=15) in the inlet manifold after the chargecooler core. CPL were aware of this prior to the mapping that they carried out. I only mention it here in case it is pertinent.

Hi there, as above is it possible any of the Hondata gents on here can elaborate on when a "race calibration" should be used as opposed to AFM/MAP based calibration? Also, what will my ECU serial number facilitate in regard to the "rev hang" issue?

I greatly appreciate any help offered on here as I'm not getting any elsewhere.