- serial number of your FlashPro: <I don't have it at the moment>
- FlashPro Manager version (not 'the latest'): 1.6.3.0
- the calibration (as an attachment): attached
- a datalog of a problem (as an attachment): attached
- what sort of vehicle you have: 2006 US S2000
- anything about the car which has been modified from stock which may affect the ECU (don't include what sort of rims you have nor stereo etc): K&N FPIK, J's header, 70mm Berk high-flow cat pipe, T1-R 70EM cat-back exhaust

Initially I thought the Live Tuning Tables were the culprit, but I've disabled them and the problem has persisted. I also thought it was a pre-O2 exhaust leak, but restarting the car seems to fix it. I've gone so far as to remove my header to inspect for exhaust leaks and found nothing.

These images were generated by logging the same strip of road, the same tune, the same gas, but different times of day.

The first trip was captured by starting the car without FlashPro connected. 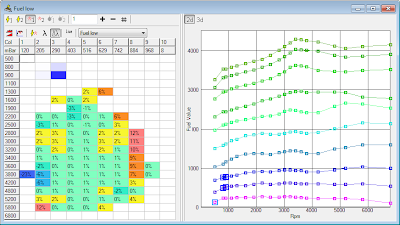 The second trip was captured by starting the car with FlashPro connected. 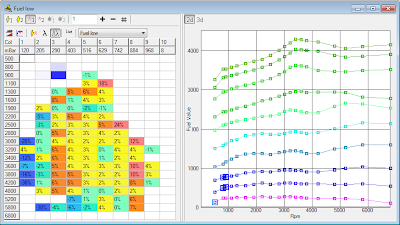 different times of the day: how different are the IAT's?
Top

+- 3% is about as good as you'll get with the Honda fuel injection system. There are many factors which the PGMFI system either does not consider or the input variables to the ECU are not 100% accurate.

It is difficult to see how the FlashPro being connected to the vehicle would affect closed loop (unless there was a strange o2 sensor current issue) but the test you should make is to do a short drive under the same conditions with the FlashPro both connected and disconnected, and then compare the fuel trims.
Hondata
Top

Both logs were started after a period of driving, shutoff, then restarting the car; the morning I drove to Starbucks before starting the log, the afternoon I had been autocrossing.

For a narrow focus with cruise control, the trims seem similar. For the entire duration of the afternoon drive, long term fuel trim starts out to lunch and finishes out to lunch. 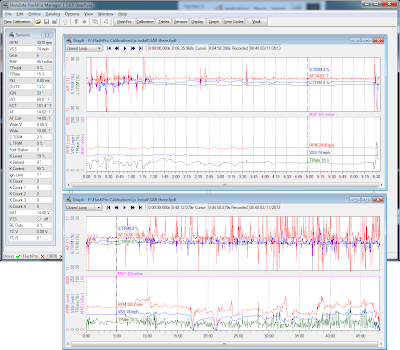 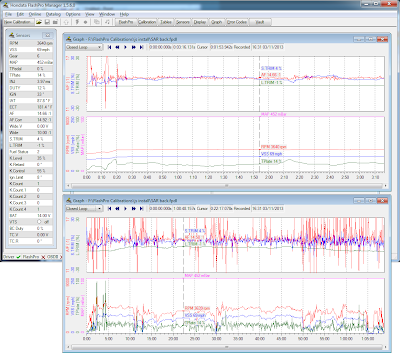 The only other suspect piece I can offer is the morning started with a reflash whereas the afternoon did not. I have seen the unusual fuel trims post reflash, as well as correct fuel trims post reflash. I reflashed the car first thing before starting the day, logged the drive to Starbucks, then flashed the changes. The second flash that morning, at Starbucks, the car lost the immobilizer after the flash and required me to reflash the car again to revive it.

While I have done your exact request in the past, log with FlashPro connected and disconnected, I will do it again and prepare data for viewing. It may take me a few days, since gather a log long enough to establish fuel trim trends takes some time. I will eliminate reflashing from the equation as well. I'm not 100% confident that reflashing has nothing to do with the problem, but I'm all for isolating the problem. I know it was a bit early to post this, but I wanted to start the discussion early because it does not seem normal to experience such fluctuations. +/- 3%, sure, but +/- 7% with no evident trends?
Top
Post Reply
4 posts • Page 1 of 1